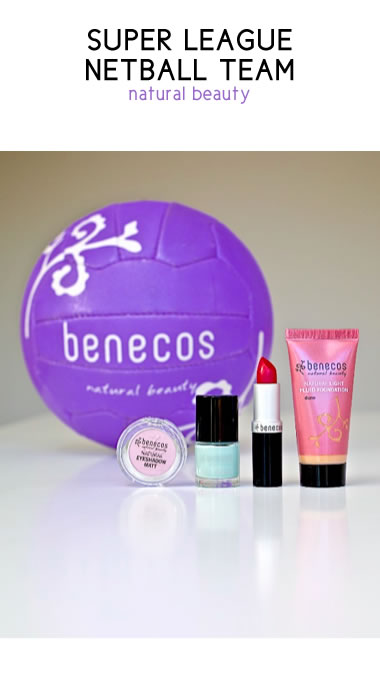 Tying in with the brand’s efforts to promote the values of natural beauty and living a healthy lifestyle, benecos – the award-winning natural and organic makeup and skincare brand has entered a four year Headline Sponsorship Agreement with the UK’s Mavericks SuperLeague Netball team, which runs from 2016 until 2020.

“This is an exciting next step for benecos as it is the brand’s strategy to develop and grow brand awareness to a younger audience in the UK”, says Graeme Hume, MD of Pravera Ltd and distributor of the benecos natural and organic skincare brand in the UK. “Benecos is all about organic natural cosmetics and skincare that help you look good, feel good and live a healthier life. These values are a perfect fit with the Mavericks women’s netball team and we are excited to sponsor the team and develop the relationship over the next four years.”

As part of the sponsorship, the benecos logo will be given prominent positions at all Mavericks competitive matches, including at the televised Vitality Netball SuperLeague games. In addition, the new 2017 Hertfordshire Mavericks’ SuperLeague dresses will feature the benecos branding. More joint brand activities are in the pipeline and will be announced over the next few months.

Benecos is an award-winning, certified natural makeup and skincare brand that makes you look good, feel good and live a healthy, happy life. Benecos has developed a new website dedicated to netball and includes the full product range: www.benecosnetball.co.uk

The brand name refers to the Latin word ‘bene’, which means ‘good’, and cosmetics. The aim of the German brand founders Silke and Stephan Becker was to develop a high quality, reasonable priced natural make-up, nail polish and skincare brand that would also attract a younger audience and introduce them to the benefits of natural cosmetics.

All products are BDIH certified - with the exception of the nail polishes which are free from six harsh chemical ingredients. There are no parabens, silicones, PEGs, TPHP, paraffin, synthetic colours, fragrances or chemical preservatives present in any of the benecos skin formulations. Most products are also suitable for vegans and vegetarian.